The Mythical World of The Lightbringer

The Lightbringer is an atmospheric melodic metal band from Quebec, Canada. Led by the two brothers Simon (Auraeon) and Olivier (Archan), the band was brought to life in the year 2008. The brothers ensure all the songwriting, artwork, recording, and mixing work.

On July 17, 2020 The Lightbringer released the third album – ‘From the Void to Existence‘.

The band created their own unique majestic world. To be honest, before publishing this article I thought that maybe I just saw the surface and must dig much deeper. And yes, I still think that I could ask additional questions and develop each of the answers below into a text that would be as long as the whole interview (and to get an endless article as a result). Surely the band has a lot to say! But finally I’ve decided that it would be much better to leave this post as an introduction that invites readers to explore ‘the Lightbringer Lore’ by themselves instead of forcing the artists to retell everything in more brief and less artistic way.

I opened your site and the first thing I mentioned is that you have not only three albums but also four books: a book for each album and also ‘Mythical Tales book’. As I understand, books and music are the parts of a complex conceptual project. What is the main concept of the project?

Right. The Lightbringer is definitely a conceptual and very personal project, that combines all my passions including illustration, fantastic stories, and music, of course! I see The Lightbringer as a journey that puts the spectator between light and darkness, telling him legends about ancient Gods and forgotten worlds. We open the gates of a fantastic universe of symbols, mythical creatures, eternal and powerful beings, and majestic and unknown worlds. Our goal is to introduce you to this imaginary world using multiple forms of art. Please note that you can access our books and our music for free through our website. Have a look.

What is more important: music or books? Do you write books for better understanding of your music? Or maybe, you write music as a soundtrack to the story?

It is mostly and mainly a musical project. The books are more like bonus material to me, as well as another way to plunge into this mythical universe. In my opinion, a conceptual album inspired by fantasy required a book. There are very few bands that are doing this, and I don’t understand why this approach is not very spread, especially in metal music, where a lot of bands have fantasy concepts.

As I see you divide your bio at three eras (an era for each album) – ‘Quintessence of Dawn era’, ‘The Heptanity era’ and ‘From the Void to Existence era’. Is there any principle how you divide the whole concept into albums?

During the first album, we have not very well defined our concept, but we needed a first base on which we can build. In the “Lightbringer Lore” timeline, Quintessence of Dawn takes place in an epoch way more recent than the one on the last two records. Heptanity, From the Void to Existence, and the upcoming album will establish the base on which this fantastic universe and its cosmogony will be built. The following releases will grow from these foundations. Each story (each album) talks about different epochs, and our personal lives also change from one release to another. I love using the term “era” to situate each album, especially when Heptanity took us 7 years to produce it !!! 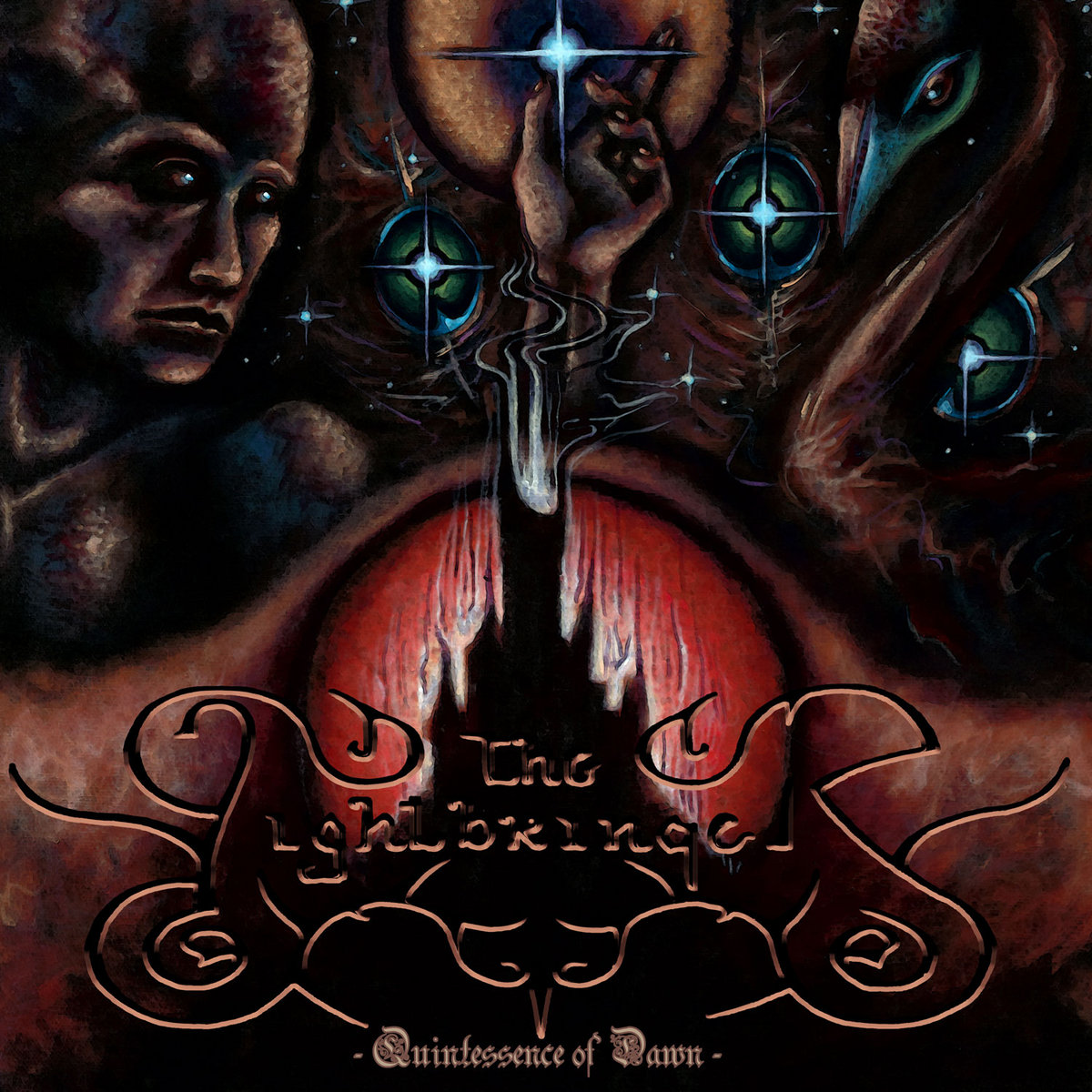 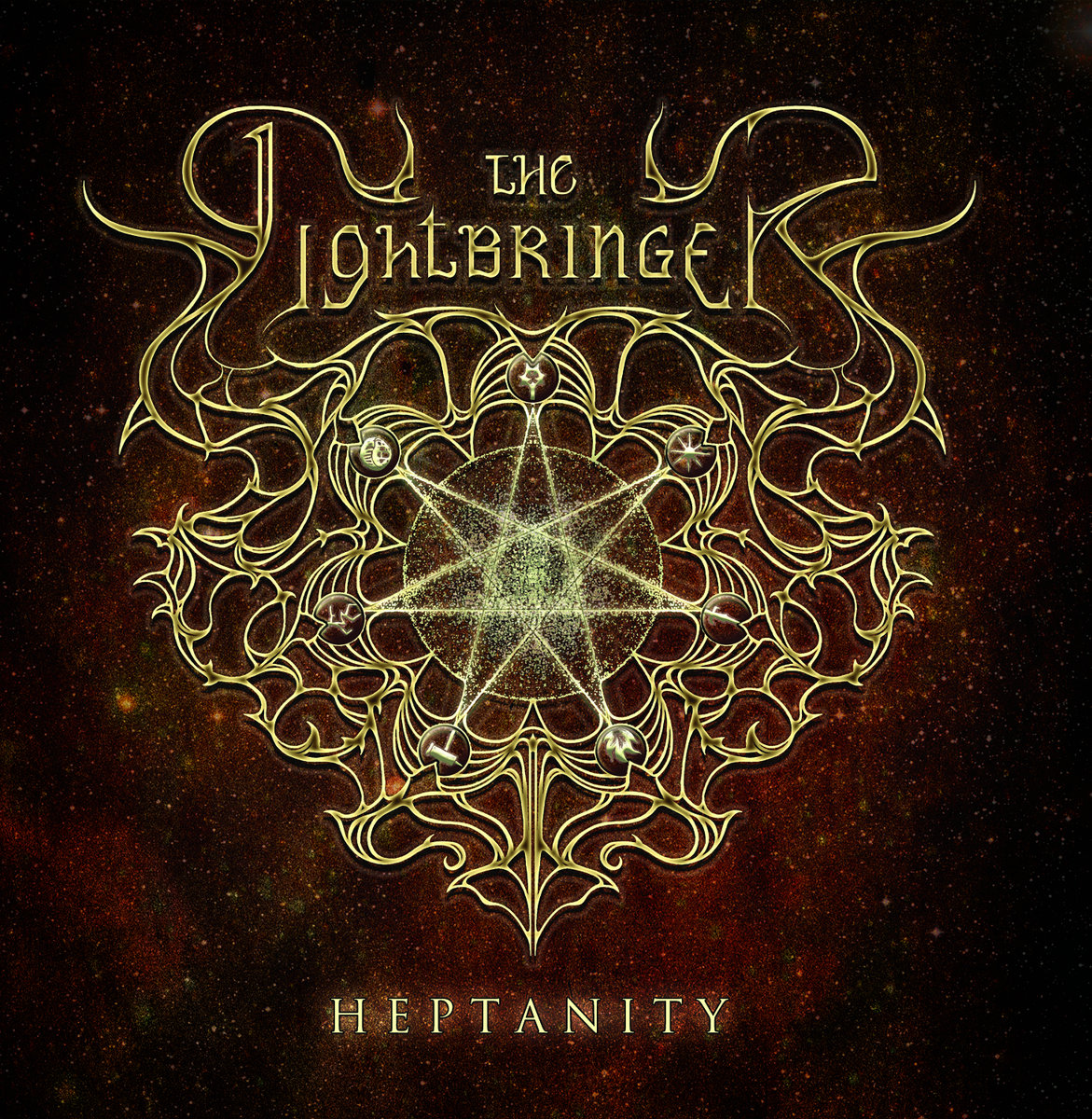 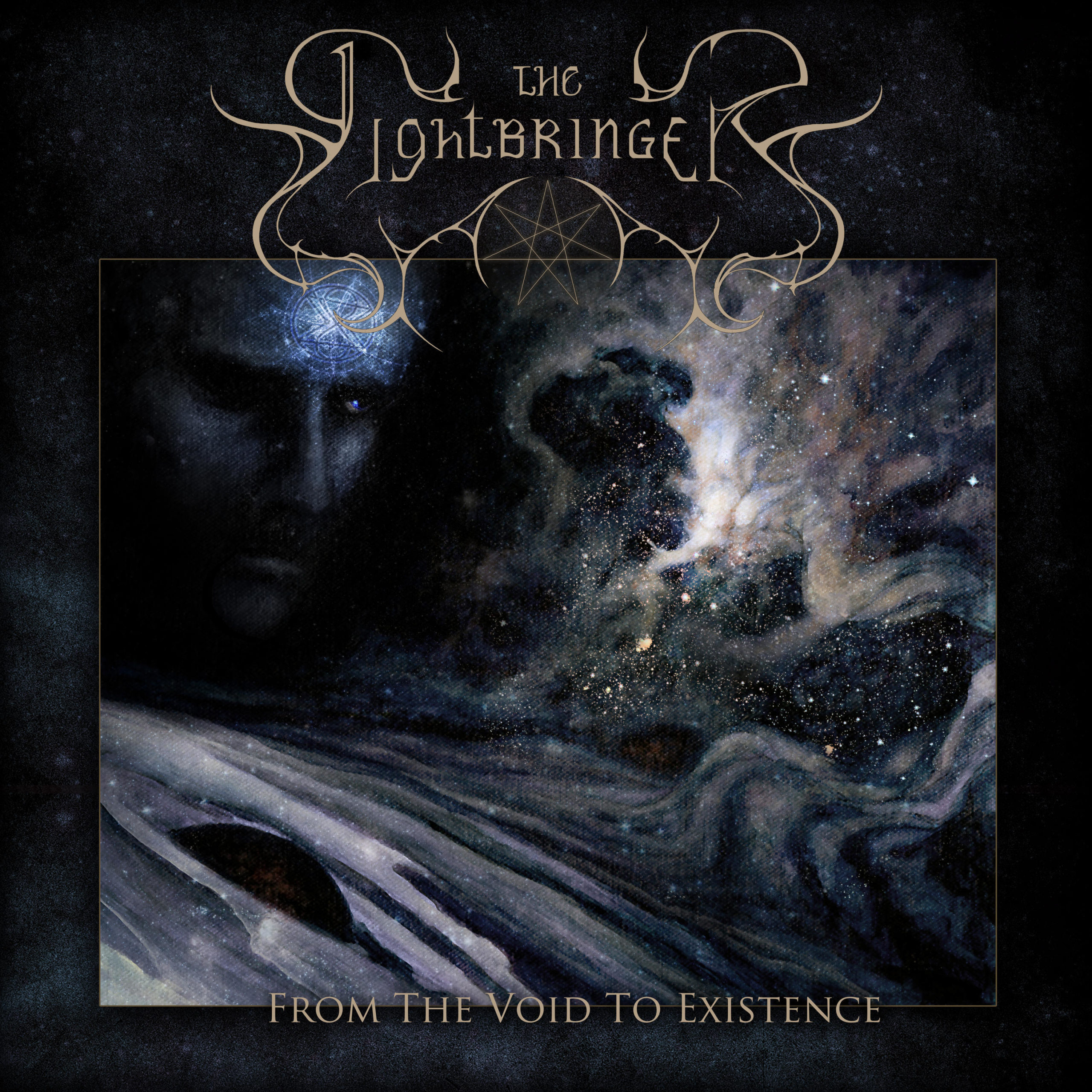 What is the ‘Quintessence of Dawn’ about?

‘Quintessence of Dawn‘ is more like an epic tale following more or less the “Hero’s Journey” template. It is about a prisoner of cold and darkness that has finally responded to its destiny, to deliver him and his fellows from the evil that consumes them. He confronts demons and mythical creatures and travels through unknown and disturbing worlds. Unsuspected and tremendously powerful powers will awake in him and permit him to find his way to transcend his human condition. He will free his soul to become… a bearer of light!

And what is ‘Heptanity’ about?

‘Heptanity‘ is a concept album where each of the songs takes the form of a hymn that celebrates the might of the seven primordial divinities and their power. The Heptanity symbolizes the alliance of the seven Gods in one omnipotent entity, creating the material dimension of Existence.

What story do you tell in your last work – ‘From the Void to Existence’?

‘From the Void to Existence‘ establishes the fundamentals of the universe behind The Lightbringer and its cosmogony. It tells the birth of the 7 high spirits when they awoke from the void dimension. Each chapter tells the evolution of the 7 spirits, from their awakening in the eternal abyss to their incarnation in the majestic kingdoms of existence. This song (yes, it is only one song) evolves from one chapter to another without repeating its themes; we adopted a very progressive approach for this EP.

Spoiler alert: The upcoming album will link the history of “From the Void to Existence” to the one of “Heptanity” to make it develop over time. In other words, it will be a sequel.

In you bio I see names of band members on each era: for example, Sol-Orcus, Aethera, Auraeon, Celestheia, Archan. Firstly I thought these are the nicknames of band members but there is ‘incarnated by… ‘ and real name next to each nickname. I decided that maybe they are characters but we may hear only two voices according to these titles. So what is it?

I like the idea of incarnating entities instead of using our actual names. It seemed to us an efficient approach to deeply plunge the listener into this mythical world. Since we are some sort of messengers that have witnessed ancients and forgotten worlds, we express and materialize these visions from far away using writings, symbols, and music. In a way, we are the avatars of the ancient spirits that communicate their knowledge and wisdom through our bodies and senses. This concept is yet to be developed!

Let’s return from conceptual things to the Earth.
The Lightbringer is “Led by the two brothers Simon (Auraeon) and Olivier (Archan)”.
Was it hard to find other band members? How did they come to the band?

Finding members was never a problem for us. We had the chance to meet talented and passionate musicians at the right time for each album. Each member was a friend of ours or someone with whom we had musical opportunities.  We were introduced to Fanny (Celestheia) because our bands played on the same bill. We played there with our power metal band (Tales of Destiny) and Fanny played drums (sounds weird, huh?) for the opening act. That evening, she told us she sings, and we were searching for a female singer to perform on Heptanity. She is part of the team since then. Olivier (Archan) has recorded the album of Phosphorus, the previous band of Stanislav (Sol-Orcus). He liked his drive, his charisma, and his never-ending motivation.  He was the perfect candidate; we offered him to perform on Heptanity, and he joined with high enthusiasm. The lineup has never changed since then, and everything goes well so far. 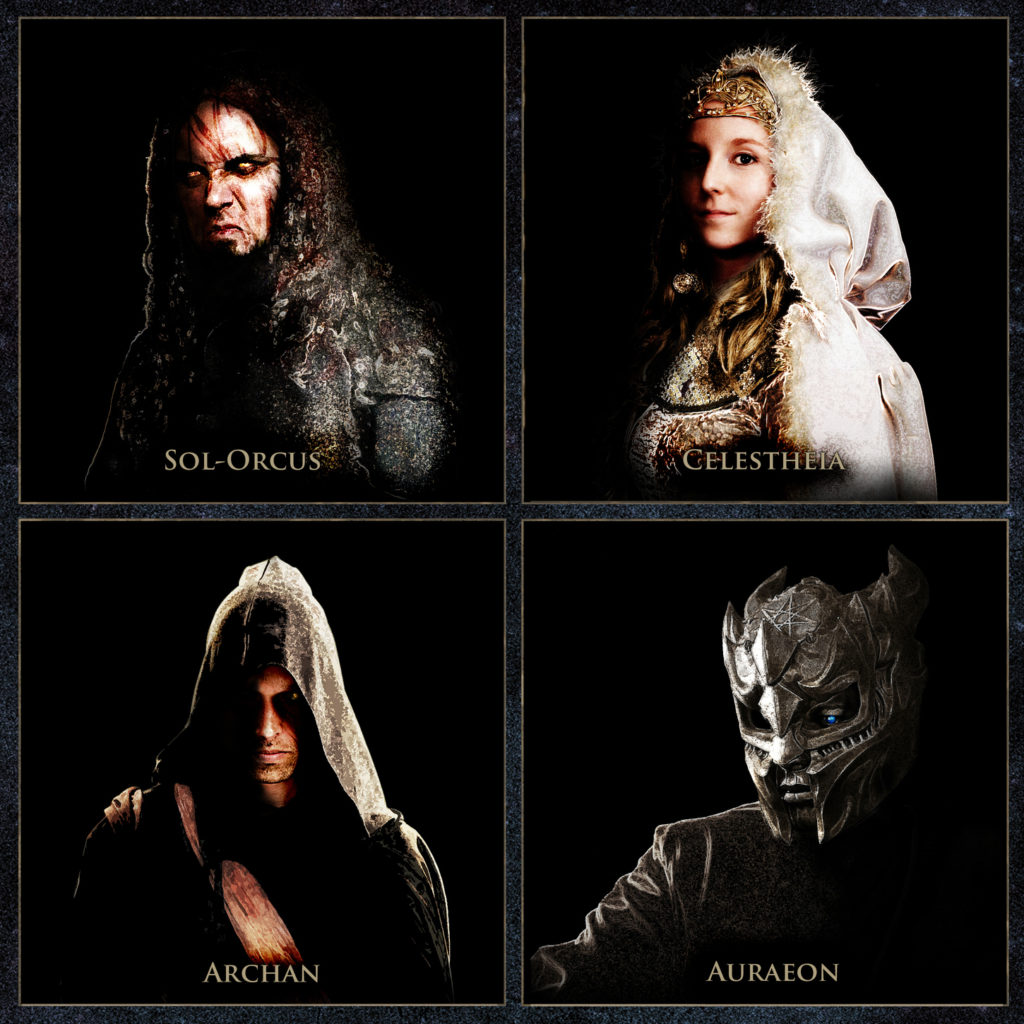 Fanny has studied singing and music, and I think we can clearly hear that when listening to the records. Stanislav, my brother, and I have never attended any musical academy, but we all play music since our teenage years. Olivier and I recently joined the Bulgarian Pagan Black/Folk metal project Tsar Stangra, the principal project of our singer Stanislav. If you dig stuff like Arkona and Nokturnal Mortum, we highly recommend it. Stanislav also plays guitar in Ültra Raptör (heavy/speed metal) and he is a session member of Dépérir (Black Metal). He previously played in Phosphorus (Black/Thrash Metal) and Angelfall (Thrash Metal), that do no longer exist, and several other bands before that have never released anything. Fanny played drums for the stoner metal/rock band Iron Trap and sings in La Fille du Vent, a musical project inspired by classical music and “Chanson Française”.  My brother (Archan) and me (Auraeon) had several common projects, such as Tales of Destiny (Power Metal), Dark I (Blackened Death Metal), and a personal project of Olivier (Archan) named Dyonight that will come soon. Olivier now fully devotes to his studio. The others all have a full-time job, but music remains our principal passion. Being able to live from music required a profound devotion and a lot of sacrifices that very few are able to make.

In your press-release you define your genre as Atmospheric Black Metal but at your site I see the phrase ‘Melodic Mythical Metal’. Which one is correct?

We have written atmospheric melodic black metal in the press release to permit medias to immediately locate us when consulting our band. The latest EP sounds close to this label, but The Lightbringer is far from that to be quite honest. For this reason, I think the label “Mythical Melodic Metal” is more accurate and we will mainly use this label to describe our music in the future. The Lightbringer is an imaginary universe filled with contrasts and nuances, and for this reason it is hard to use specific and established labels to define the music. The melodies will always adapt to the story told and the part of the universe that we explore. You will be surprised and will hear more than expected.

At your site you begin your bio from the fact that you were inspired by the metal of 90s. But now is 2020. Is your music actual now? Why?

To be honest, our goal is not to make actual music. We would like to create a timeless music that can be appreciated no matter the epoch in which it is consumed. I think the concept we explore with The Lightbringer matches with this notion of timelessness.

What are you going to  do next?

We will work on the upcoming album, for which the bases are established. We will return to an approach similar to Heptanity with grandiose arrangements, but we will keep the dark atmosphere exploited through “From the Void to Existence”. It will probably be our most mature album so far, and we are very enthusiastic for the rest!