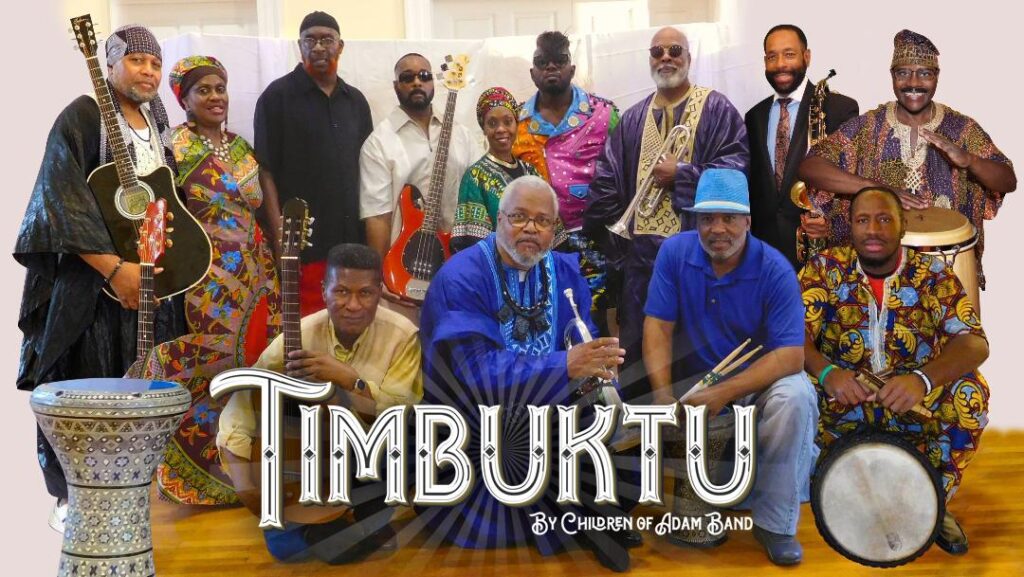 Children of Adam Band is an ensemble from Philadelphia, USA, an exciting new band of seasoned professionals. The most part of the band members are mature musicians who have lived through the decades of music styles and productions and somewhat familiar with the most part of them. They produce a new world hybrid sound developed by Baba Kenya, that is a multilingual fusion of Jazz, R&B, Latin, Funk, African, Middle Eastern with a splash of American Soul and Spoken Word. Musicians define their genre as “PMB” that means Positive Message Bearing Music.

The songs contain positive universal themes including respect for Mothers (‘Mama’), anti-bullying, the universal commonality of humanity (‘Come Together’) and the need for tolerance (‘Skin I’m In’). No profanity, gangsta rap, misogyny, drugs, violence, or verbal abuse exist in the music of the band. Lyrics are multi-lingual with English, Spanish, Hebrew, Arabic, Wolof, Fulani, and other languages. Mesmerizing performances incorporate video imagery and a spectacular female “whirling dervish dancer.” Audiences can’t remain seated!

The concerts of The Children of Adam Band also feature positive reaffirming videos where possible.  They speak to the world with a goal to bring light  and build human bridges of understanding.

The debut CD, PMB, Positive Message Bearing Music Vol. 1: BILAL was released on 05 Oct 2019. Eight tracks of original positive message bearing music written by Baba Kenya and produced by Images of the Motherland. You may stream or download any song or the entire album on your favorite music platform. You may also purchase hard copy CDs via your favorite platform or contact the band.

Here is a video where you can see Children of Adam performing their hit single ‘Come Together’ from PMB, Positive Message Bearing Music Vol. 1: BILAL:

Though Children of Adam released their debut CD in 2019, the story of the band have started more than 20 years ago from the Images of the Motherland interactive theatre. Led by Founder / Executive Director Baba Ahmad Kenya, Images of the Motherland Interactive Theatre (IMIT) missions to instill dignity, self-esteem, tolerance in and mutual respect among community members using authentic “living history” dramatic, visual art, music, dance, cinematic, and museum practice storytelling that builds bridges of understanding across age, culture, race, and religion.

In summer 2021 Children of Adam Band are going to release their second CD: “TIMBUKTU” PMB Music Volume 2. The album expounds on COA’s unique sound by adding spoken word and more dialects to the mix. “TIMBUKTU” PMB Music Volume 2 immerses a listener in a human journey  from young inquisitive childhood through enlightenment and maturity to experience and “wisdom”. It’s an experience of “growth” starting with the opening song titled “Searching” and dealing with today’s world social issues. If you’ll visit live performances of Children of Adam Band you can see a special event performance with a masked dancer. This is a feature of the title song ‘Timbuktu’.

The band invites you to join the journey here!