Julio Awad, a pianist with a large catalog of classical, film, and stage performances, and Patxi Pascual, an innovative woodwind player who collaborated with the largest names in Spanish Flamenco, Big Band, and Jazz, joined together and released their debut CD ‘Flash & Shadow’.

The first single, ‘Flash & Shadow Pt. 1’, impressed us by the clean sharp sound and touching melodies. As we understood from the press-release, this effect had been reached by the spectral separation of instruments (sax takes highs and piano is in the lows and mids) together with the virtuous bouncing of each others overtones by the two players.

Here you can listen to ‘Flash & Shadow Pt. 1’ while reading our interview with Julio Awad and Patxi Pascual.

Firstly, could you, please, tell us about your musical background?

Julio: I grew up in a family of musicians, I think that in my destiny it was impossible not to dedicate myself to music. Since I was a child I saw great pianists whom I admired accompanying my mother who is a great singer and that is the reason I began to study the piano at I was 7 years old, at that time my mind wanted to study the piano a lot so I could accompany my mother in the near future.

Patxi: I started playing my eldest brother guitar in a self-taught way. My first steps in music were playing in Folk music groups and later Andean music groups where I started playing wind instruments like the Kena and the Zampoña and then, when I already had my first flute, I played with Celtic music groups. I discovered Jazz Rock and then started playing the soprano saxophone.
When I was 20 years old as a self-taught musician, I started my studies at the Madrid Royal Conservatory, where I graduated as a Professor of Flute and Saxophone.
I have always used the piano for writing music, but I have always had an interest in Ethnic wind instruments. I studied Bansuri, Ney, clarinet and I have done collaborations with many musicians of other cultures.

As I understood from your bio, you have a large catalog of classical, film and stage performances, and decided to add a jazz project now. How did this idea come to you?

Julio: Jazz appeared in my life at the age of 14 thanks to my piano teacher Juan Carlos Cirigliano. He introduced me to the world of jazz and made it my passion. I always had a parallel career in jazz apart from my career in film and theater. When I was very young I had the opportunity to record with great musicians like Peter Erskine, Paul Wertico, Mark Egan, John Patitucci and I was able to learn a lot from them.

Patxi: Julio and I met working with Paloma San Basilio, a really famous singer in Spain and South America where we worked on different tours for many years. Since the beginning, we had a great friendship and an exceptional musical communication between us. We have been working for many years in several projects of different styles and we have collaborated in the recordings of our solo albums. It was unavoidable to create a joined
project with our compositions.

Your debut album is titled ‘Flash and Shadow’ where saxophone is flash and piano is a shadow. Is it the only meaning of this title or maybe you have assumed any other interpretations?

Julio: Patxi and I have been playing together for many years, collaborating on our solo albums, this is the first work that we signed together as a duo. We wrote this LP in the Covid lockdown, for us it was a long Flash & Shadow moment.

Patxi: I think our music is really descriptive specially in the songs developed as improvised compositions and the flashes and shadows are the extremes our interpretations can reach. Sometimes the flash is the sax and sometimes is the piano. We switch the roles.

Have you imagined the result in the beginning?

Julio: No, we discovered it little by little. note by note.

Patxi: We are really happy with the results of our creative process. Now we want to see the public’s reaction.

Patxi: Sometimes is a melodic line and sometimes is a chord progression. Sometimes it comes from recording music in a completely free way without a preconceived idea.

Do you have any favorite tricks in musical composition or production?

Julio: Yes, we listen to each other a lot, and we work as a team.

Patxi: In my opinion, every technique of composition is valid, from the most intellectual to the most intuitive.

Patxi: I listen to every kind of music, but I try to listen to music that for me has quality. Every past and current trends of Jazz, Classic music, World music and Rock. My influences range from Bach to The Beatles, Miles, John Coltrane, Paco de Lucía, Weather Report, Chick Corea, Michael Brecker, Jan Garbarek, and most recent musicians like Brad Mehldau, Seamus Blake, Chris Potter and Donny McCaslin.

Julio: Music is my life.

Patxi: I direct three Big Bands and I am Superior Professor in the Degree Programmes in Jazz and Contemporary Music in Madrid. It is my job, but also the reason of my existence. 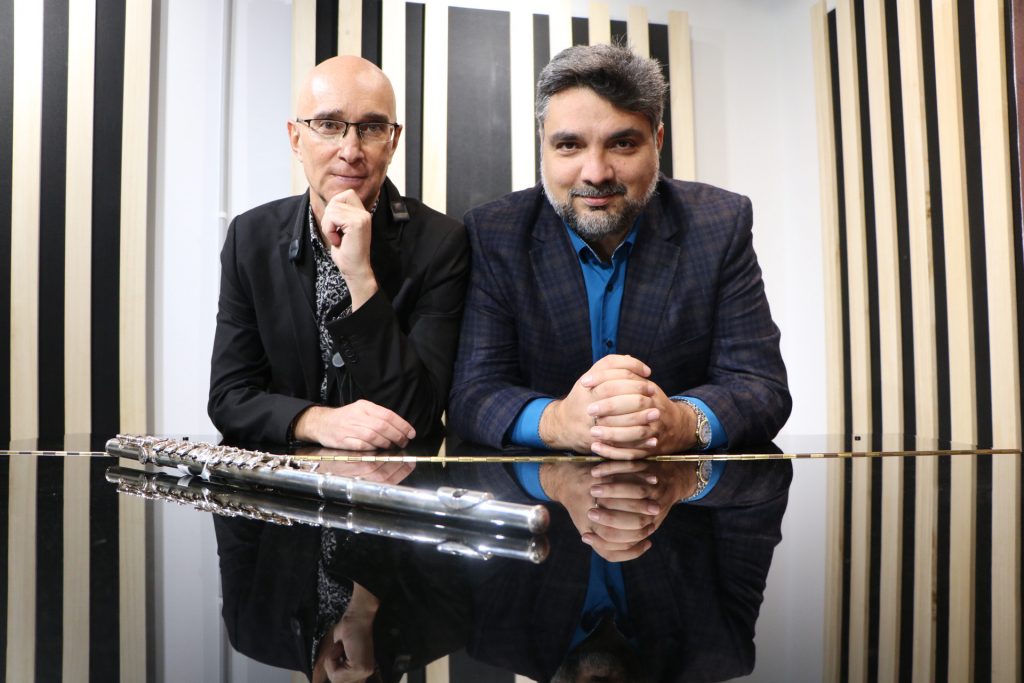 Julio: I´m olympic shooter, when I practice is the only time I can disconnect from musical thoughts.

Patxi: I love cinema, there is a connection between seen or reading stories and then creating stories and developing music ideas. I also practice mountain biking and swimming. Those sports help me clear my mind and to focus in music.

Julio & Patxi: We will start the promotion and tour of the LP.

Where could our readers find ‘Flash and Shadow’?