Alan Goldberg is a musician and composer from Austin, Texas, USA. Alan composes instrumental pieces from progressive rock to mellow jazz. Starting his music career over 20 years ago performing with blues/rock bands, he has since released four albums and “The Show” EP.  He is focused on working with film, streaming, and video creators to provide compelling music for their projects.  “The Show – Deluxe Version”  EP  will be released this spring with two additional songs.

“The Show” is “incidental music” meant to be played, either recorded or live by a jazz combo, as the background music before, during, and after a theater performance of any kind, from school performing arts productions on up. Goldberg worked remotely with talented musicians from around the country to pull together the tracks for the songs. As Goldberg explains, “I composed this EP at a time when there was little going on in the way of live audience performances, but I could see and hear ‘The Show’ in my head. I know that live shows will be back stronger than ever”. 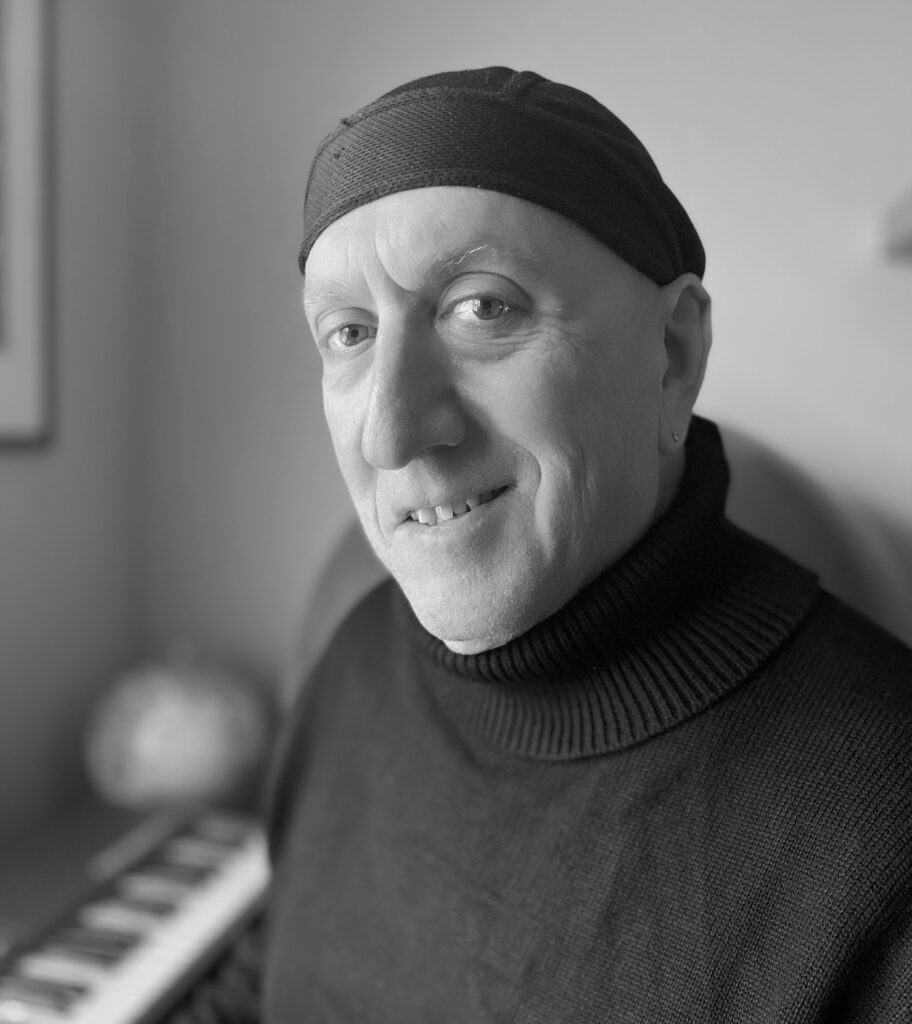 I would say that music came to me. My mother said that I ‘bit the piano’ when I was three or four years old. She always used to point out my teeth marks in the wood of the piano to people. My older brother took piano lessons but pretty much gave it up when I would hop on the piano bench and play by ear what he had been working on hard to play from the sheet music. He got annoyed with me. There is music playing in my head all the time, even when I’m sleeping. My dreams have a soundtrack.

Why have you chosen jazz?

I like many genres. Jazz is freedom. It has richness and complexity and a wide range of styles within it. My earliest exposure to jazz was through the music of Vince Guaraldi as soundtrack to the “Peanuts” cartoon specials. I wanted to play that. As a teenager, I listened to a lot of rock and progressive rock, as well as progressive jazz – Chick Corea, Herbie Hancock, Keith Jarrett. I like any genre that makes me feel free when I listen to it and when I play. There is a big musical palette to work with in jazz. I like strong melody and melodic solos. I like walking bass lines and weaving horn lines together with the piano, like I did with the songs in “The Show” EP. I play what I hear in my head and for “The Show” EP it was definitely Jazz.

Have you ever imagined your life without music? If yes, what would you do in such life?

That’s kind of like asking if I can imagine my life without air. Even when I worked in the corporate world, sitting in some meeting or at a customer location, there was music playing in my head. I’ve been fortunate to be able to pursue music full time for the past few years. As far as careers, if I couldn’t do music for some reason I used to think that being a marine biologist would be interesting, or being a pirate.

In one of your interviews you say that personal grow is the main goal for you. But what do you mean under this term?

I see personal growth as becoming a better overall person. This includes musical growth which keeps me energized and focused on doing the right things, as well as having a better understanding of myself. I hang on to old stories of my life that I believe make me who I am, but some of them are not helpful and can just be left behind or seen in a different light and I would be better off. That’s the target for growth. I think everyone has them. Growing is hard. It’s continuous activity, but big changes come in bursts and moments, and doesn’t stop no matter what age I am as long as I give myself the opportunities to grow. I’ve come to recognize a ‘growth spurt’ when I feel uncomfortable and excited at the same time, and I am performing or thinking in a ‘next level’ way. It’s hard to look back not very far at all and then ask myself “why wasn’t I like this before?”, or “how did I not know to do that?” As long as I’m working on growing as a musician and as a person, I’ll be fine.

How do you measure this growth?

Musically it’s easier to measure. There is always so much to learn and listen to. Getting better at the craft is number one. If I learn some new chord progressions or master an exercise, or try things in a song that I’ve never done before, then the progress is obvious. I think my arranging and composition is getting better with each song as well, or at least I hope so.

Is  there any concept in “The Show”?

“The Show” is definitely a concept EP. The six songs on the “deluxe version” coming out in spring 2021 fit in the genre of ‘incidental music’ – music made for a live stage production, but not part of the actual stage performance. The original idea came from a 40 second piece of music that I made for an intro to a short film. The movie creator wanted something ‘darker’, so that piece wasn’t used. I liked it, so I added solos and verses and finished the song. That song became “The Show”. It is a good introduction piece and I envisioned an audience getting settled in their seats for a play or other performance while the small jazz combo was playing “The Show”. Once I did that, I thought about what other music my imaginary combo could play, so I created a fast (“Intermizzion:One”) and a slow (“Intermezzo:Liscio”) intermission song, then the Finale (Finale:Consumato). Those four became the original released “The Show” EP. The deluxe version adds the songs “Curtain Call” and “Afterparty” to round out the stage performance theme.

I plan on publishing the sheet music so a live combo could play the music at an actual performance. That’s why I used common jazz combo instruments in the arrangements. Any combo from high school level on up could play these songs as incidental music for a performance and have fun with them.

How did you compose the songs for “The Show”?

I play all of the songs on the piano first, without any written music. Once I have the piano part completely laid out, I play it through and capture the performance on a MIDI track. Then I add the bass, and a scratch drum track. That is the core of each song. As I said, I play what I hear in my head, so after this is done I hear melody lines in my head that turn into sax, trumpet or whatever instrument fits that part. This was all done during the Covid lockdown. I sent the sheet music for the horn parts to musicians from around the USA that I work with and they sent back the recorded horn parts. The drummer listens to my demo mix and then plays the drum part, adding his own style.

I have had some of the melodies on “The Show” with me for quite a while, and I ‘reimagined’ them in a jazzier style, which was fun.

Do you have any favorite tricks?

For composition, I like to use Pianoteq. It has a record feature, so I just set the metronome and press record. I save the MIDI files that it creates and give the file names good descriptions so I know what’s what. Then I review the ‘good ones’ and some of them ‘graduate’ into songs. With Pianoteq, you don’t even have to press record, it can always capture everything played on the keyboard, so nothing gets lost. This ensures that I capture the immediate feeling of the piece.

For production, a tool I find essential to the ‘virtual production’ approach that Covid made necessary is Melodyne. When I am putting recorded tracks together that were recorded by individuals scattered around the country, it’s much different than recording a band together in a studio. With Melodyne I can edit the audio they send so the parts fit together more like they were played in the same room – especially for pitch, time, and note volume.

What are you doing with your free time?

When I’m not working on music, I like to ride my bike or other exercise, read a bit, cook, and I allow about an hour to stream whatever is on the top of my list. Once I can get out more, we like to go to New Orleans, especially for Jazz Fest, Austin City Limits Festival, and hiking around someplace woodsy.

Which musicians inspire you most of all?

There’s a range of musicians and composers who inspire me in different ways. The people that don’t compromise inspire me. Frank Zappa is a good example. A survivor like Ian Anderson from Jethro Tull, who always forged his own way with his music is an inspiration. Bob Marley’s strength of spirit is an inspiration. Danny Elfman as a composer is awesome. There are so many great jazz players – Miles Davis, Bill Evans, Chick Corea who I can only listen in awe at their talent.

Do you participate in any collabs with other musicians?

I’ve played in a local band in Austin for the past 20+ years. Playing together live is a great way to stay fresh and continue to grow. With Covid, I’ve been using a set of great jazz musicians remotely to play tracks for the songs. One of my target areas for growth is more collaboration with other musicians and composers. It’s always a positive thing.